A Whirlwind of Workshops

It’s been ages since I’ve updated this blog, mainly because I’ve been too busy working to write much! The last 12 months or so has been a whirlwind of workshops alongside all my regular coaching. The highlights for me were the Dissecting Aerial Symposium way down South, the Reflective Practice events I have been running in North Wales, and of course the Women’s Climbing Symposium, bang in the middle of Birmingham.

Presenting to different audiences is something I enjoy – I’m passionate about making the science of psychology practical, so that climbers and other athletes can apply the principles to their practice. Aerialists were a new audience for me, though I confess that I made full use of my sister’s (an aerialist herself) contacts to prep for this workshop, asking what the common issues for performers were. I’ve had a go at aerial myself and its flipping (‘scuse the pun!) hard, with parallels to climbing but also a lot of differences. I noticed that the attendees were really open to talking about nerves/ stage fright and fear of hard tricks in a way that climbers often aren’t. 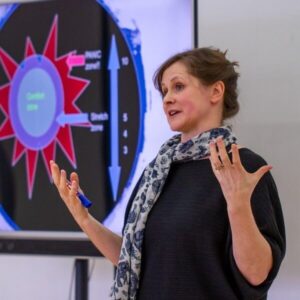 The reflective practice workshops are free events I have been hosting an facilitating for any coaches or instructors who want to have space to think about the mental side of climbing. My role is to create a safe space for people to figure out what works and why, and also why some techniques don’t work for some people, or why we might struggle to coach some clients effectively. I’ve run two events now and am planning another via Zoom in May, and they have been really thought provoking. I think we all come away having learnt some theory, some new top tips, and having had time to figure out what our learning needs are.

Finally, I was honoured to be invited to speak at the by now iconic Women’s Climbing Symposium. Having attended the very first one in Liverpool, it was great to see how much the event had grown and developed, and the team behind it all were supremely well organised, and what a great line up! My presentation focused on fear of falling, and why falling practice isn’t necessarily always the best way to overcome that fear. The commonly used falling practice protocols do not have the weight of science behind them, and can be result in sensitising rather than desensitising you to falling, so they need to be used sparingly and carefully, with some modifications. There were loads of questions afterwards which I love, and I’m aiming to get the presentation up on here soon, so if you missed it, watch this space. 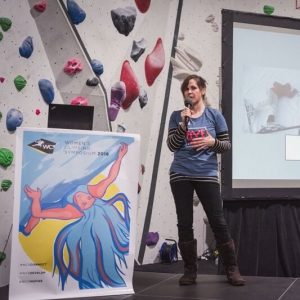 There were stacks more workshops in between – for the Diploma in Mountain Medicine, the Army Mountaineering Association, for Explorers Connect, the North Wales Youth Academy, CBT coaching…to name but a few. I’ve got a short interlude now as I’m working on refining a mental skills training package, following some really positive reviews by my intrepid testers earlier this year.

We can’t get out climbing at the moment, which is frustrating given the weather has been PERFECT!! However, I would say, be easy on yourselves if you haven’t been rocking the indoor training or managing loads of CPD and self development. Everything will still be there for you tomorrow, and maybe right now, we just need to hunker down, do the necessary to survive, and focus on the basics. I’ll look forward to seeing you back at the crag soon.